6TH WOMEN SPORTS CARNIVAL, 13 APRIL 2013 Organised by Malaysian Masters Athletic Association
Malaysian Masters Athletic Association (MMAA) has successfully organized the Women Sports Carniva,l on the 13 April 2013 (Saturday) for the 6th year in the Institut Pendidikan Guru Kampus Bahasa Melayu, Lembah Pantai, Kuala Lumpur (IPG KBM). The programme was organised with the cooperation of the Ministry of Youth and Sports Malaysia, Teachers Training Institute of Malaysia and IPG KBM. It involved about 600 women some of them came from as far as Kedah, Penang, Ipoh, Johor, Terengganu, Negeri Sembilan, Melaka and Sabah. Their age ranged from the college students of 19 years to women athletes of 76 years old.

This programme is MMAA’s contribution to the wellbeing of women in our country. The main objectives are to promote healthy lifestyle and to involve women in fun activities /competitions for the well being of athletes and non-athletes. This programme consisted of the following: 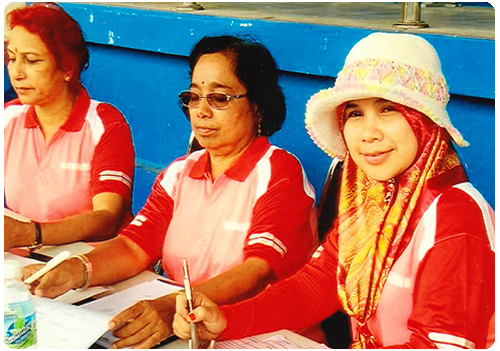